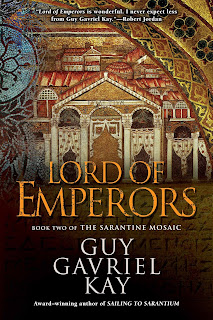 "Not far away from that palace room where no bird is singing, a man is as high in the air as birds might fly, working from a scaffold under a dome. The exterior of the dome is copper, gleaming under moon and stars. The interior is his.

There is light here in the Sanctuary; there always is, by order of the Emperor. The mosaicist has served tonight as his own apprentice, mixing lime for the setting bed, carrying it up the ladder himself. Not a great amount, he isn't covering a wide area tonight. He isn't doing very much at all. Only the face of his wife, dead now two years, very nearly.

There is no one watching him. There are guards at the entrance, as always, even in the cold, and a small, rumpled architect is asleep somewhere in this vastness of lamplight and shadow, but Crispin works in silence, as alone as a man can be in Sarantium.

If anyone were watching him, and knew what it was he was doing, they would need a true understanding of his craft (of all such crafts, really) not to conclude that this was a hard, cold man, indifferent in life to the woman he is so serenely rendering. His eyes are clear, his hands steady, meticulously choosing tesserae from the trays beside him. His expression is detached, austere: addressing technical dilemmas of glass and stone, no more.

No more? The heart cannot say, sometimes, but the hand and eye - if steady enough and clear enough - may shape a window for those who come after. Someone might look up one day, when all those awake or asleep in Sarantium tonight are long dead, and know that this woman was fair, and very greatly loved by the unknown man who placed her overhead, the way the ancient Trakesian gods were said to have set their mortal loves in the sky, as stars."
Posted by JOSÉ LUIZ FERREIRA at 15:56 Sem comentários: 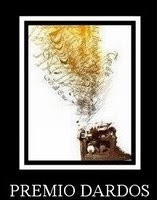